curry recipe | side dish for peas pulao | potato kurma recipe | potato korma is a easy recipe that will be a good pair with roti, naan, poori, ghee rice, Biryani, pulao especially peas pulao. Sometimes I will use this for idly, dosa. Like all other kurma/ korma recipe, this potato korma also a coconut based recipe. Coconut and spices has been ground finely, and add into to the curry finally. It is a basic korma recipe, helps us in rush time when we have lack of veggies at home. Most of the time we would have potato all times at home. So it is a handy recipe.

I have used coconut shred here. Adding coconut impulse the flavour of coconut’s unique taste and fragrance to the curry. 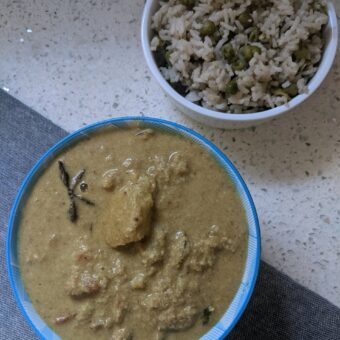